Beni Etter (a current intern of STB in Ethiopia) created a short movie at the end of his “Hackysacky”-project. “Hackysacky” are hand-made crotched balls which the kids filled with small stones and popcorn and are being played by juggling with the feet. Beni taught the children how to make and how to play “Hackysacky”. Watch the short movie showing an imaginary “battle between angels and demons” – a play created by Beni, in collaboration with the STB kids and co-workers.

Already two months passed since our last blog-entry. In this time, a lot of things happend. New children came to Sport – The Bridge (STB), a lot of activities were organised, the rainy season is about to finish and we’re still happy to be here. We would like to tell you about two topics.

This is an event who is organised every year. This time, it was a bit special because of the ten years anniversary of STB. The aim of the ceremony was to appreciate that all the former and present STB-students succesfully finished their school-year.
Around 200 children and some of their parents were attending the great ceremony held in an event-hall next to Jan Meda in the morning of August 26.

The event was a good mix of interesting speeches, karate- and dancing-shows, award-giving for excellent efforts, short movies, interviews, an art-exhibition and – last but not least – a delicious meal to end the ceremony.

It was interesting for us to see how such kind of ceremonies are held in Ethiopia. We were impressed how entertaining and informative the ceremony was, even though the preparation-time was quite short.

The organisation of this event kept everybody busy. Uncluding us. Moira held several dance-lessons with the aim to perform the developed dance at the school closing ceremony. It became a funny mix of ethiopian and european dance. The involved children were very motivated and happy to dance in front of so many people.
Beni prepared a short movie about the ten years anniversary. He used old movies from the STB-archive and put arranged them to a short film.
After the four hours of celebration everyone left the event-hall very happy.

In the garden happend a lot as well. After the rain and hail destroyed a lot of vegetable. We held an emergency-meeting and decided to construct small roofs above the patches and were forced to replant some vegetable. 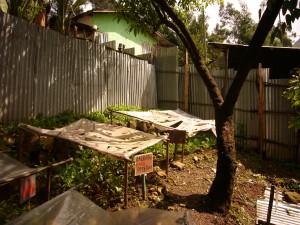 Now the plants have recovered and are growing fast. The children take their responsibility to clean the garden regularly.

This month, we started with the gardening on the STB-compound as well. The compound already looks greener than before.

In october, when the vegetable is ready to harvest, we want to do a garden ceremony at the peer house garden. We’re going to invite all of the STB-staff. The event is going to be planed and realised with all the “garden kids”. We will let you know about this and other events and projects in the future… 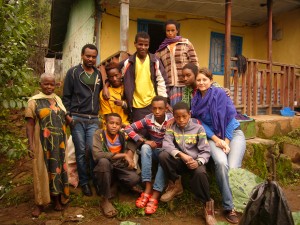