After finishing Gigathlon Ethiopia children’s sport event, the 12 years street boy explain that  “We had came only for fun but the event challenged us a lot especially some drug user children were not able to finished the round”.  Similarly One 14 years girl from school said that “I like to do such kinds of games  especially riding Wheel but people discouraged me when I play at my village because they understand that the game is belong to boys only, but in this Gigathlon we all did boys and girls equally.”  Gigathlon is giving chance for all children with out the difference of sex, skill and background. It involves street children, school children girls and boys to play together.

2011 Gigathlon Ethiopia was held Dec.24 in Addis Ababa at big sport field, Janmeda, among children from street and school. The event was covers around 2km and combined four types of distance games which are familiar with Ethiopian kids. The participants were competing on the event by forming a group of four members. Based on the objective of the event different livelihood messages transfer during the event with different ways. 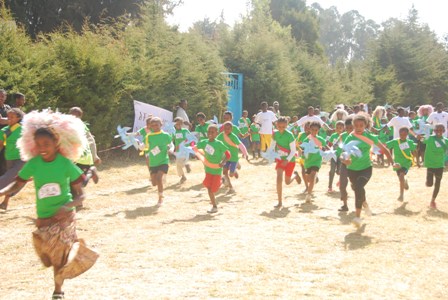 Regarding to the games the idea of Gigathlon Ethiopia has not to introduce new games for the children, rather to recognize the children traditional games and creativity in the big event. All games included in the event are familiar by all participant children. The event has given a big attention for the children thought and activities. Generally the objectives of the event are in one hand to transfer educational and health messages to participant children, in other hand to create especial sport and play event for all children to make fun. 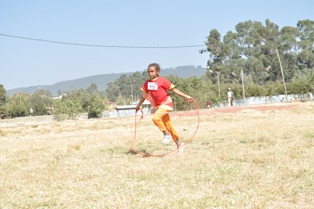 During the event day street children had the chance to show their talent by presenting poem, drawing exhibition, messages and song of the new Gigathlon’s Anthem after trained for two weeks. The active and creative talents of participant street children have impressed other children and spectators.

All children had enjoyed on the event. They got at least one of their favorite games. Most of them except STB’s follow up program are for the first time to be part of this kind of children celebration.  All participated children approved that they learn different life values from the event like team work, fair play, striving to wine and etc. At the end all of them wished to be invited for the next year.

In this year event some new activities have happened, the two main ones were STB’s older club system boys were serving in the event as coordinators and the second one before one day of the event STB’s club system boys and parents of children cleaned the big sport field Janmeda where the sport event was held.